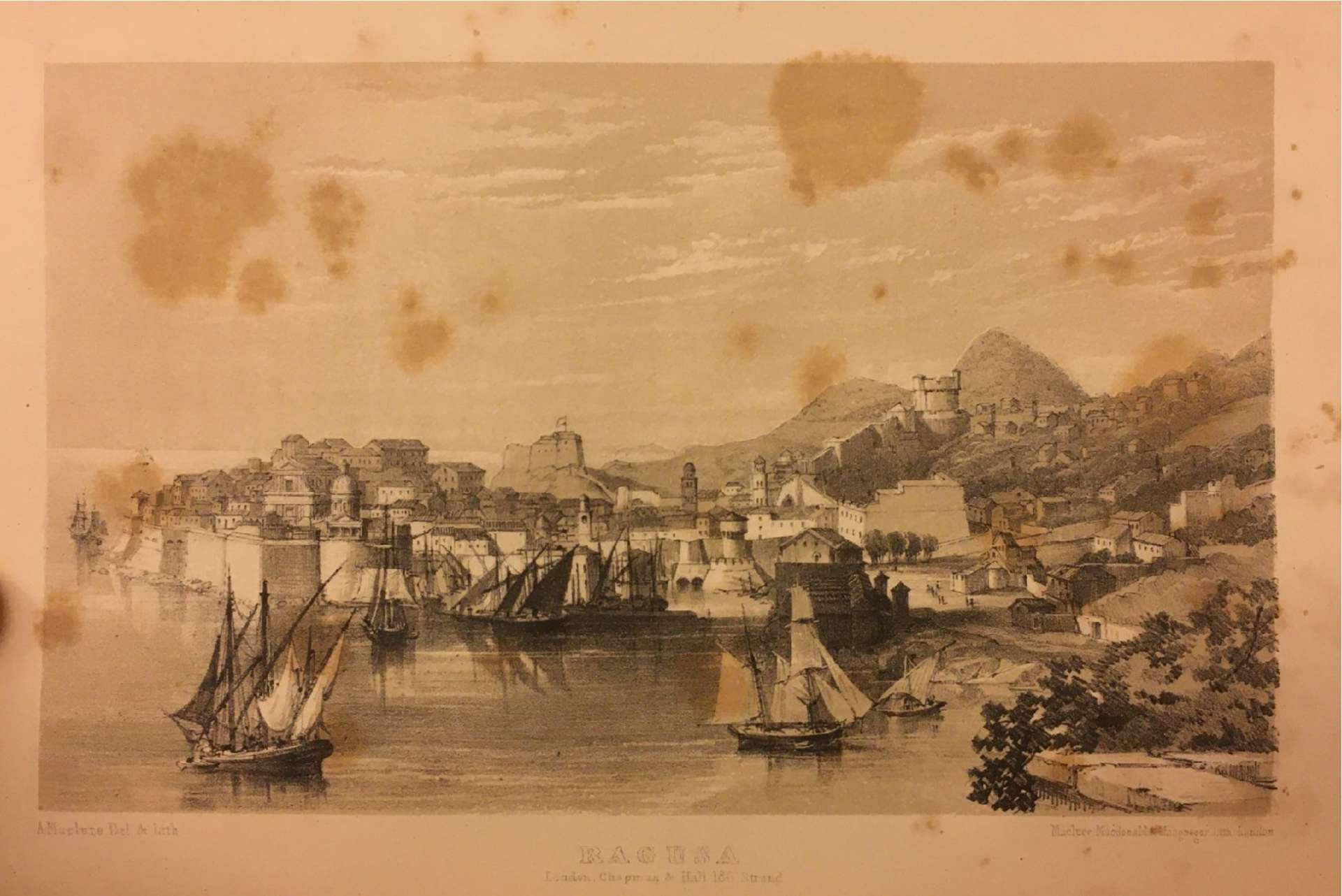 “Ragusa is situated on the southern side of a small isthmus, but the port is only for the galleys of the middle ages. Half a mile off, on the northern side of the isthmus, is the Gulf of Gravosa, which is the port of the vessels of long course. After entering a ponderous gate, I found myself in the high street of Ragusa, called by themeselves Stradone, the like of which is not to be seen in all Dalmatia for width and excellence of its construction. Not far from the gate is the hotel Alla Corona, where I got a good room, and was treated with great civility; but in all other respects it was deficient in the comforts and conveniences of even a tolerable hotel. Being the only one in the town, I removed to private lodgings in the house of a respectable widow lady, whose father had, some forty years before, been consul of the Republic of Ragusa at Smyrna. […]. The space on which the city is built being so small, the houses are lofty, and the streets in general narrow, but clean and well-paved; and in no city of so small a size have I seen so many elegant edifices congregated together; so that I felt myself in a charming Italian capital of the second class (pp. 107-109).

The appearance of the population is a complete contrast to that of Cattaro. Several erect old aristocratic-looking figures moving about shew that this city has been long a seat of culture; and the toilets of the fair part of the creation, with a complete absence of finery, shewed a taste and elegance that was unmistakable, - albeit understood, using the modes of Europe. But in the market-place, at the foot of a high flight of stairs leading up to a Jesuits’ church, was a crowd of the peasantry in the neighborhood. A tall ruddy-faced man, from Brenno, with red bonnet, loose brown jacket, and wide breeches, with game hung over his shoulder, talks to a dame who holds in her hand a large green cabbage, - a subject for a modern Mieries: he is full of natural ease and politeness, and is a complete contrast to the rude Morlack boor whom we saw at Obrovazzo, on our first entrance into Dalmatia (p. 110).

The Piazza behind the port is, beyond all comparison, the most attractive part of the town. Ragusa is the place where the marriage of Slaavic vigour and Italian elegance has been consummated. The language, the nationality, and the manners of the mass of the people, are Illyrian, but Illyrian conjugated with Italy’s happiest moods and tenses of embellishment (p. 111). Ragusa is as remarkable as Venice for the beauty of the fair sex: they have all dark complexions, and the mixture of Roman with Illyrian blood is evidently so considerable, that the contour of the Ragusan in general is scarcely to be distinguished from that of the Italian (p. 147). The society of Ragusa is very agreeable to a stranger, who does not enter into the petty jealousies of old nobility or parvenu. Some of the best families, in spite of their long pedigrees, are not in a more prosperous condition than the Hidalgo of Gil Blas; but several, having preserved their entailed estates from dispersion during the French occupation, are in easy circumstances. One of the more fortunate of these families is distinguished by a refined literary taste; and their old Italian library, with Aldine and other editions, Latin as well as vulgar, was not more interesting than their assiduous attentions were aggreable. The pride of birth is so universal in those who can boast of it, that we must set it down as just and natural; but for the Ragusan nobility to maintain this Chinese wall, after they have lost their national independence and that wealth without which aristocracy cuts a sorry figure, is surely contrary to common sense. A rich aristocracy, open to rising wealth and talent, will always command respect; but the exclusive principle, unsupported by large pecuniary means, is a chimera (pp. 141-142). Occasional balls and the opera for a couple of months are the entertainments of winter. […] The theatre gave me little satisfaction, being small, and badly lighted (p. 151).

Ragusa always maintained a traffic with European Turkey, as much from its geographical position as from the political relations existing with the Porte. The enemy of Venice and the ally of Genoa was protected by the Porte; […] in Belgrade, Roustchouck, Silistria, Adrianople, and Sofia, were so-called Ragusan colonies, or, in our own commercial language, factories, in which the consul exercised civil and criminal jurisdiction. Ever since the destruction of her mercantile navy, in consequence of the French occupation, Ragusa has ceased to possess any maritime importance in the Adriatic; that is to say, instead of 300 merchant ships of long course, she has now not quite 60. Once exclude a place from trade for a few years, and disperse irs capital, and it is very difficult to restore it again. […]. Undoubtedly the first measure ought to be a total abolition of the Customs duties; for Dalmatia, nowhere very broad, is here a narrow stripe of a very few miles, so as to render smuggling quite easy, and the collection of an adequate revenue impossible. Ragusa is still the port of Herzegovina, whence its raw products are exported, and whither its manufactures are imported (pp. 193-194).

Another of the partial ameliorations is an alteration in the duties levied by the Vizier of Herzegovina on imports and exports, which are no less than twelve per cent duty, while Austria has a right to have her trade carried on along the land frontier at a three per cent duty. It may be asked how such a state of affairs can exist in a province adjoining the Austrian states; but the fact is, that in this part of European Turkey, the Vandée of Turkey, the power of the Porte is nominal […] and Austria has now enough on her hands to let this frontier alone. Another measure would be satisfactory to the Ragusans. The Levant steamers from Trieste to Corfu, instead of taking the direct line by Dalmatia, cross over to Ancona, coast along to Brindisi, and cross over again to Corfu, to the east of the mouth of the Adriatic. The passengers may be divided into two classes […]; for the cabin-passengers, who are, for the most part, persons in easy circumstances visiting tha lands of classical antiquity, nothing could be more attractive than a visit to the noble ruins of the palace of Diocletian at Spalato. […]. Ragusa is, moreover, the point at which Bosniacs going to Costantinople might embark, and thus save the long land journey, and the city would gain by being put in direct communication with the Levant. With a university and a more moderate Customs tariff, I think that Ragusa might bloom forth anew, if the inhabitants chose to second these measures by putting forth their own energies (pp. 197-199)”.